The Marches region is 9366 square kilometres wide; its resident population was 1.470.581 inhabitants, according to the 2001 population census (152 inhabitants per square metre).

The region occupies the Adriatic side of the Umbria-Marches section of the Apennines, more or less from the Foglia valley in the north to the Tronto valley in the south. 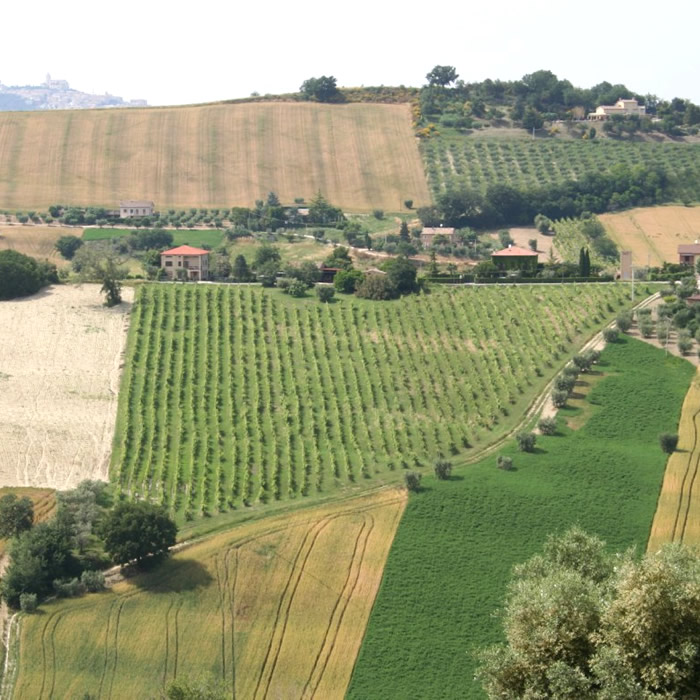 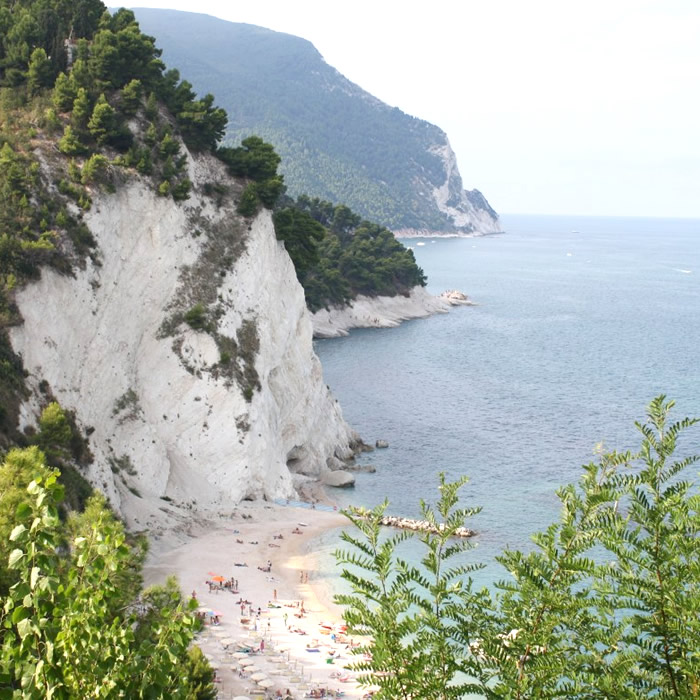 The plains are not wide, but they are intensively cultivated and populated; some stretch of coast has great naturalistic interest; the mountains, often with a wild appearance, characterize the inner zone.

But the most typical landscape of the region is probably the vast hill area, almost entirely constituted by a polychromatic mosaic of cultivated fields, which is peculiar to this region.

In addition to the hills' profile and the nature of their ground, their look has certainly been caused by the long permanence of the sharecropping in the region. The sharecropping brought about a great number of small plots of land, owned by the landowners, but cultivated and lived by the tenant farmers who earned their livelihood from their work. So those fertile hills appeared like a series of multicoloured squares, depending on the crops, and the farm houses where placed inside the fields.

This situation substantially changed after the industrial boom and the quick urbanization occurred between 1950 and 1970, which caused a strong exodus from the countryside and the passing of the sharecropping and the fragmentation of the farms, replaced by bigger plots of land, run by farmers.

But the landscape continues to be picturesque, even if is not exactly what it was once. Many of the houses of the holiday farms described in this site, are the old rural houses, renewed and adapted to the guests' requirements.

In ancient times the region was occupied by Gaul in the north and by Picene in the south of the Esino river; the Roman conquest starting in the third century B.C.. It was initially divided into two regions, the fifth (Piceno) and the sixth (Umbria), and was unified in the year 292 A.D.; later the region had different administrative subdivisions.

While Lombards settle down in the south of Ancona, the Ravenna exarchate controls the northern area (Pentapoli marittima), which later the Frankish donate to the Pope (752). During the tenth century the name Marca appears, indicating an imperial sphere of influence: the marca of Camerino first, then that of Fermo, extended by the addition of the territory of Ancona. Despite the power of the lay and ecclesiastic feudalism, many towns set up free cities.

Beginning from the thirteenth century, various aristocratic families, like Montefeltro (in Urbino, Cagli, Fossombrone), Da Varano (in Camerino) and Malatesta (from Pesaro to Osimo), achieve and gradually consolidate their power. But the papacy, on the basis of old law, tries to impose its authority over the whole territory, now fighting against, now coming to an agreement with the communes, the feudal lords and the squires; even in the fourteenth century, thanks to the vigorous action of the cardinal Albornoz, directly or indirectly controls many cities and castles; then, after the ephemeral dominion of Francesco Sforza (1433-44) and Valentino (early 1500), completes the subjection of the region, occupying the commune of Ancona (1532), then the dukedom of Urbino (1631), where the family Della Rovere, taken the place of the Montefeltro, ended. The Papal States rule the Marches, with the short exception of the Napoleonic period, till the annexation to the Italian Kingdom, in 1860.

Plentiful evidence of those and other historical events remain in many towns and villages of the region. 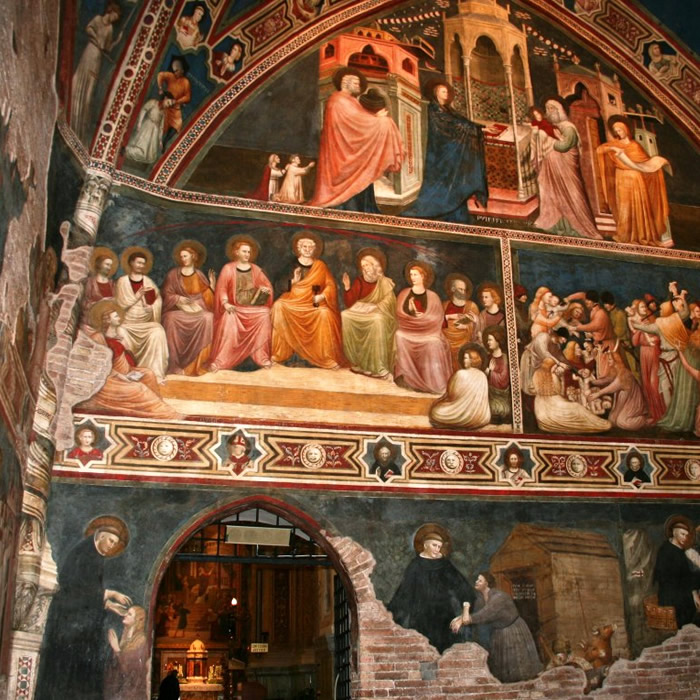 The region occupies a prominent place within the context of the italian art, even without a particularly marked artistic physiognomy.

Remarkable Roman remains are scattered in the Marches' territory (Ascoli; Fermo; Urbisaglia; Falerone; Helvia Ricina near Macerata); the arch of Augusto in Fano and the arch of Traiano in Ancona got almost intact to us.

The constructional activity during the Romanesque period (eleventh-thirteenth century) was noteworthy: between the more significant churches, where you can often notice a fusion between Lombard and Byzantine elements, you can remember S. Maria di Portonovo near Ancona, S. Maria a Pie' di Chienti, S. Vittore delle Chiuse, S. Claudio al Chienti, S. Maria di Rambona, S. Ciriaco of Ancona, the cathedral and the parish church of S. Leo, the baptistery of Ascoli, besides houses in Ascoli, Ancona and elsewhere.

The Gothic period (thirteenth-fifteenth century), when the Venetian influence was little by little prevailing, was fruitful, too: between the buildings stand out S. Francesco of Ascoli and S. Nicola of Tolentino, which contain a notable cycle of frescoes of the school of Rimini of the thirteenth century, and the works of Giorgio Orsini da Sebenico in Ancona.

The Renaissance marks the height of the art in the Marches. The activity concentrated particularly in Urbino, round the splendid Duke's Palace, and in the basilica of Loreto, attracting famous architects (Luciano Laurana; Baccio Pontelli; Francesco di Giorgio Martini; the Sangallo etc.), sculptors (A. Sansovino) and painters (Piero della Francesca, Melozzo, Signorelli, the Vivarini, Giusto di Gand); more remarkable buildings stood in Pesaro (Duke's Palace, the Rock, villa dell'Imperiale), in Jesi (palazzo della Signoria), in S. Leo (rocca) and in several localities. In the beginning of the fifteenth century a local painting school developed (Gentile da Fabriano, the Salimbeni, etc.), which then fused with the Umbrian one, while many works of artists from Veneto poured in (C. Crivelli; Giovanni Bellini; Lotto; Tiziano).

The region gave two outstanding artists to the Italian art, at that time: Bramante and Raffaello. Finally we have to remember the splendid products of the minor guilds, especially the majolica, which reached the greatest splendour in Castel Durante (the present Urbania), Urbino and Pesaro. From the baroque period on, the region lived under the influence of Rome.